I invite you to celebrate Martin Luther King Jr. with Thomas Lane and I. I received an inspiring email that led to this interview on 1/16/23 recorded and released on MLK Day.

The March on Washington
Maybe like you, on my journey towards clarity, there have been moments in my life where conflict and trouble seemed to melt away, leaving nothing but a bright constellation of formerly broken pieces in alignment: sometimes magical, sometimes comical, always profound.
There was a singular event that happened in my early teens when this experience occurred and became a North Star for my life. I was not alone. The same occasion impacted millions of others who bore witness to the spectacle: now etched in the history of our progress as a people –– simply referred to as The March on Washington.
Racism. The word itself seems bitter on the tongue. Even as a child, growing up in a progressive household, I could feel my stomach tighten when the subject came up…an instinctual outrage erupting over the cruelty and injustice to our black brothers and sisters –– instigated by a poisonous gene in our nation’s DNA.
These horrors were discussed frequently with my family at the dinner table. Particularly with my activist mother who, despite being a kind and compassionate woman, was privately a soul plagued by deep depressions who had lost the capacity for hope.
But then it became 1963 –– that moment in time when the cultural Tsunami of the ‘60s was beginning to take shape –– gaining conviction as it crossed the globe, invading countries, disrupting the carefully mapped blueprints for lives of quiet desperation.
This call for change came to me via books, music and Eastern thought. In wave after wave of new perspectives, it pounded against the thin shell of my white middle-class childhood, demanding something new and different; an activity, a state of mind…but remained formless until finally crystalizing into a single objective: join The March On Washington.
On August 28th, 1963 I did so.
Early that morning, a friend and I made the long journey from New Haven to DC. I didn’t inform my parents I was going. I simply made up a shore story… and went. My reasoning was simple and telling. I wanted to avoid my mother’s negativity tainting my experience.
I tried brushing aside my guilt for this as I boarded the bus. But it accompanied me throughout the long bumpy ride.
Much of the detail and circumstance have fled from memory. But what thundered across my world was the awesome fact that I was there! I had arrived! I was in Washington DC, taking a stand with brothers and sisters. Metaphorically speaking, I was joining a march that I had been part of, ever since the day I learned how to walk.
Stepping down from the bus, I was immediately caught up in the jubilations of a kindred cause…the sight and sound of thousands and thousands of individuals flooding the National Mall…a pilgrimage transcending personal agendas to stand shoulder to shoulder with complete strangers….streaming down hills, stepping across roads to assemble in solidarity before a small stage cluttered with microphones and officials –– all overseen by the watchful eye of the Lincoln Memorial.
And there we were. Carrying banners, singing gospels and folksongs with purposeful joy that spread across this diversity of the human spirit …swollen with this moment of unity.
Thereafter, the inspiration rained down… talks by John Lewis and Roy Wilkins, performances by Mahalia Jackson, Marian Anderson, Peter, Paul & Mary, Bob Dylan and Joan Baez …to name a few. All setting the stage in emotional crescendo, to introduce me to the man who would become mentor and hero…the Rev. Martin Luther King. It was here that he gave his “I have a dream” speech…solidifying his meaning for this moment in time; that would echo his messages to us for generations to come. I listened with my heart as he guided us through his vision, his commitment to peace and brotherhood…and his call from the mountain top…free at last, free at last!
It was an epiphany for me…the puzzle had called its pieces, letting my inner, troubled fragments settle into something whole and lit.
Somewhere, during this moment, I spotted a woman, sitting alone beside the Reflecting Pool, looking out on the Washington Monument. Somehow familiar? Stepping closer, I recognized and approached. Standing behind her, smiling with tears in my eyes, I reached around my mother’s thin frame, and cupped her eyes with my hands. In a shaky voice I said,…”Guess who?”
She didn’t have to guess, Without a word, she reached out to touch my hand with her hand…a mother’s tenderness, then turned sideways to catch my eye. The look that passed between us over a half century ago is still traveling within me now as I write these words.
Thomas Lane 1/10/22

Raised in Connecticut, Thomas Lane is a multi-dimensional creative drawn to spaces where art, spirit, and social justice intersect. He is the author of The Artists’ Manifesto, a tribute to the power of the arts and its value to a society that has forgotten the precious nature of life.

In addition to creating a collection of poetry, screenplays and paintings, he recently recorded a CD of his songs, entitled Hotel Earth under the stage name Trakker.

Politically active since his teens, Thomas subsequently created The Helen Hudson Foundation, a nonprofit focused on social issues including homelessness, racism and the environment. He currently lives with his wife in Rhode Island. 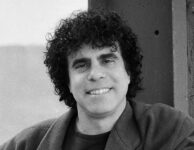